Ever think that you know something is wrong, but no one believes
you? Well, if so, this novel, If You’re Out There, is for you. It is
written by Katy Loutzenhiser, and features Zan as the main
character. Zan is in high school.
Alexandra, also known as Zan, has been friends with Priya for her
whole life. They did nearly everything together. So naturally, Zan
would be sad that Priya moved away without telling her. But, Zan
notices something odd going on. Priya isn’t her usual self on social
media, and not answering Zan’s calls or e-mails. Also, she is not
showing her face in pictures anymore. Zan thinks something is up,
and investigates.
When she tells everyone her theory, they tell her to let it go and
let Priya start over. She might want to change her personality or
something, they say. Zan reluctantly agrees, but still has a bad
feeling in her stomach for Priya.
Is Priya possibly in trouble? Is Zan just worrying too much? This
thriller of a novel will keep you on the edge of your seats as you
read this book and discover the answers to these questions.
I think this is a great book for teens. It has suspense, action, and
contains a funny, easy to follow story line. You become sympathetic
with Zan and the rest of the characters as you read this book.
Finally, it contains elements that teens can relate to, such as a best
friend moving away. I rate this novel 5/5 stars.
Posted by By Teens 4 Teens at 12:46 PM No comments:

Exact Opposite of Okay by Laura Steven Book Review

S.
Grade 8
Rating 5
The exact opposite of okay
By Laura Steven
Izzy is a high school girl trying to survive in a school where everyone looks down at her. Her parents died in a car accident when she was young, and Izzy is being raised by her grandmother who is poor. Izzy has a great group of friends and is heavily involved in the school theatre program. She wrote a screenplay which a teacher kindly submitted to a prestigious contest for her because Izzy didn’t have the 50 dollar entrance fee. Winning would be a dream come true.
Unfortunately for Izzy, things start going very badly for her when she makes some poor decisions at a party after drinking too much. Someone takes pictures of her and a boy and starts a website about what a slut she is. Everyone sees it and the comments the kids make are so cruel. Izzy doesn’t know how she will go on and show her face at school. She is on a mission to find out who took the picture and why they would start this hateful website.
As the book progresses we see how her actions affect her in every way. Will her friends stick with her when so many are against her and will the website cause her to lose her chance at winning the writing contest?
I like the way the book is organized because its like a diary with dates and times. Believe it or not , they whole book only covers one month but so much happens in that one month.
I think the book is appropriate for teens, but not younger because it has a lot of sexual content. I really liked the book because it shows how one bad choice can really affect your whole life.

“ Warning:  Chronic pain may cause irritability, sarcasm, and bouts of profanity.”  This quote on the book cover inspired me, and will inspire other teens to pick up this book, “ Cursed ”, by Karol Ruth Silverstein.  The protagonist of this book is Erica, who suffers from arthritis at age 14.

Erica, also known as Ricky, suffers from a bad case of chronic arthritis.  She cuts school to avoid being humiliated by the other kids, and lies to her parents about doing this.  She deletes messages and burns letters from school regarding her truancy.  Unfortunately for Ricky, her parents discover her secret.   She missed so much school that the principal tells her that she might have to repeat 9th grade.  She is shocked by this news.

With the threat of being held back looming on her, she decides to change her ways for the better. But, will this action be too little, too late?  Will she manage to pass 9th grade?  Check out this novel to find out.

I recommend this book to all teens, because everybody has difficulties in life somehow, and this book shows one way of dealing with it.  Ricky is a good role model, as she is changing her ways to make her life better.  She has an improved work ethic with studying, and she got the courage to help a person in distress, therefore becoming her friend. She learned that helping others is eventually helping herself.

I rate this book 4 out of 5 stars, because it is very inspiring and funny.  Also, it is very realistic.  However, I think there could have been a little less profanity in this novel.  Other than that, it is a perfect book in my opinion
Posted by By Teens 4 Teens at 12:08 PM No comments:

Empress of All Seasons by Emiko Jean Book Review

C.
Grade 7
The Empress of All Seasons by Emiko Jean
5/5

The Empress of All Seasons is a vivid novel based on Japanese mythology. It is set mainly in Palace of Illusions, in Tokkaido, the Imperial City.
This book follows three characters: Mari, an Animal Wife yōkai (demon or monster) from the village of Tsuma; Akira, the Son of Nightmares, who is a half human-half yōkai outcast; and Taro, the Imperial Prince who disagrees with the emperor’s opinion that yōkai are dangerous monsters that should be enslaved.
In this story, one of the main events is the competition in which girls struggle to conquer the seasons and wed the prince. The competition is held because of the first Empress, who sparred similarly and married the emperor when she drew blood from him during their duel. Mari is competing because her mother forced her to; she really has no interest in marrying Taro. Being an Animal Wife, her job is to marry and then steal his fortune. Then, she will return to Tsuma with the stolen treasure.
Taro doesn’t have any interest in being a prize to be won, either. He plans to run away from the palace on the night when the competition starts. Little does he know that something will stop him.
Meanwhile, Akira watches from the shadows. He wants to become stronger and worthy of Mari’s love. In order to do that, he joins the Weapons Master, Hanako, in the yōkai Resistance.
Aside from the violent competition and wild yōkai, the story also includes romance. It shows a love triangle, a classic event in most romance stories. In the love triangle, Akira and Taro both have feelings for Mari. Mari does not feel attraction towards either, though she considers both as close friends.
I believe that teens would enjoy this novel, especially if they take an interest in mythology. 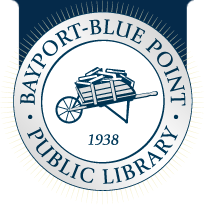 All teens are
welcome to participate in their Youth Advisory Council. Meet with your friends
and Ms. Riley, the Young Adult Librarian. We will be working on new community service ideas and Teen Halloween Chopped so be ready to discuss! Bring your
ideas for programs, books and more. Refreshments will be served as we
brainstorm new ideas. Please remember Community Service is based on
participation. Please register for this program. February we will be helping with seed prep!BPY201

Remember you can receive a Community Service Hour for this program.